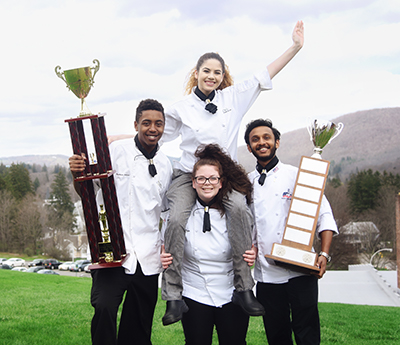 "The competition was fierce and we were able to overcome minor technical problems to bring home the trophy," said Jerusaline "Jerry" Johnson. "This win is especially close to my heart because I'm graduating this spring. It's wonderful to end my college career with this victory."

Team Delhi was coached and mentored by Assistant Professor Sean Pehrsson and Instructors James Margiotta and Victor Sommo. The faculty members collaborated with the students on planning the menu and have overseen team practices since February.

"We spent countless hours perfecting the dishes," said Professor Pehrsson. "Each student had a great attitude and work ethic. We are proud to have the cup in Delhi for the year and look forward to returning again next year to defend it."