On September 24, the SUNY Delhi Alumni Association hosted its 44th annual Alumni Awards reception for a limited group of guests during the college’s virtual homecoming weekend. Five exceptional individuals were recognized for their contributions to their professions, communities, and the college.

Linda (Darling) Powell received the Distinguished Alumna Award. A 1965 graduate of the veterinary science technology program, Powell started her professional career at Cornell University College of Veterinary Medicine. In 1969, Powell and her husband Josef founded the Fredonia Animal Hospital, the first American Animal Hospital Association in Chautauqua County, which has served the Dunkirk-Fredonia community for 50 years. Linda Powell is an active volunteer. She is Vice President of the Cherry Creek Community Association. She has given many years of service to St. Anthony’s Roman Catholic Church, as well as served as President at Holy Trinity Catholic, and Fredonia Catholic Schools. Over the years, her family has hosted foreign exchange students through the Rotary International Foreign Exchange program. In 2011, the Powells created the Dr. Josef & Linda (Darling) Powell ’65 Endowment Scholarship to award funds annually to students enrolled in SUNY Delhi’s School of Veterinary Science Technology. The Powells also established scholarships for Fredonia High School graduating seniors in 1996, and the 4-H Dairy Sportsmanship Award, awarded at the Chautauqua County Fair since 1976. “Linda has kept close ties with her alma mater, returning to Delhi frequently for alumni reunions and to meet the students who receive her scholarship.  She is a loyal alum, a valued supporter of the Alumni Association, and Delhi’s Veterinary Science Technology program in particular,” shared award nominator and retired Delhi Professor Alan Franks ’74.

Johanna (Church) DeSanto was presented with the Alumna of Merit Award. DeSanto earned a Bachelor of Science in Nursing in 2017. After graduation, she joined Healthy Neighbors International to volunteer on medical mission trips to Nicaragua and Belize to provide healthcare in impoverished villages. The experience led DeSanto to dedicate her expertise to emergency nursing. She currently works as an Emergency Department Registered Nurse at St. Anthony’s Community Hospital in Warwick. In this role, she works the frontlines of the COVID pandemic. “Johanna DeSanto is a patient advocate, vaccine champion, and all-around amazing person,” said her Delhi classmate, fellow nurse, and award nominator, Mollie Covington ’16.

Eric Weinrib was recognized with the Alumnus of Merit Award. A business and liberal arts student at SUNY Delhi, Weinrib went on to study at the School of Visual Arts in New York City. He is an award-winning filmmaker and journalist who currently produces for Vice Media. His work has appeared on HBO, Showtime, Netflix, Hulu, and Vice TV. Weinrib’s Vice TV documentary “Between Musk and Mars” was recently nominated for an Emmy Award, garnering media attention on SpaceX founder Elon Musk’s disruption of a tiny Texas village. His HBO special “The Paradise Papers” won a New York Press Club Award and his Hulu special “Russia’s War on Hip-Hop" won an L.A. Press Club award. Weinrib’s latest, “Jamaica for Sale," exposes the global aluminum industry’s impact on the island of Jamaica, stirring local debate and racking up over two million views on YouTube. Weinrib directed and produced the critically acclaimed, award-winning feature-length documentary “Roseanne for President!” which was acquired by IFC Films for theatrical distribution. He is also a long-time collaborator with Academy Award-winning filmmaker Michael Moore, working as an archival researcher on “Fahrenheit 9/11” and producing Moore’s Academy Award-nominated “SICKO” and “Capitalism: A Love Story.” Weinrib’s 1997 short film “Jimmy Walks Away” was licensed for broadcast by Showtime Networks and was included on a DVD compilation of Sundance Film Festival award-winning shorts. The film went on to show at over 20 other film festivals. The Village Voice calls it a “comic gem.” Eric says he began laying the foundation for his stellar career at Delhi studying business, though it was not his passion. “I am very proud of my time at SUNY Delhi, where some great teachers left an indelible mark on my life, setting me on the path to career success.”

SUNY Delhi’s Exemplary Service Awards are given to faculty and staff who further the mission of the college’s Alumni Association through advocacy and support. Michael W. Barnes and Timothy Hess, both retired, were this year’s recipients. Michael Barnes ‘75 began his career in higher education more than 30 years ago after successfully managing a number of restaurants up and down the East Coast.  He joined Delhi’s Hospitality Management faculty in August of 2000 as Assistant Professor. His firm but fair approach, combined with his industry experience, garnered respect and engaged students. Barnes has hosted many interactive and popular homecoming sessions for his fellow alumni. He retired on September 1 from his position as Associate Professor. Timothy Hess began his career at Delhi with the New York State University Police in July of 1989. He received various promotions and retired in October 2020 as a Captain. Captain Hess dedicated more than 31 years to the safety of the Delhi campus community. He received multiple professional service awards from the SUNY Chiefs Association for sustaining his student-oriented focus. Hess assisted the University Police Department with numerous transitions, including as an interim Chief. Known as a “gentle giant,” he is well respected and admired by many students, now alumni, with whom he made a special bond. 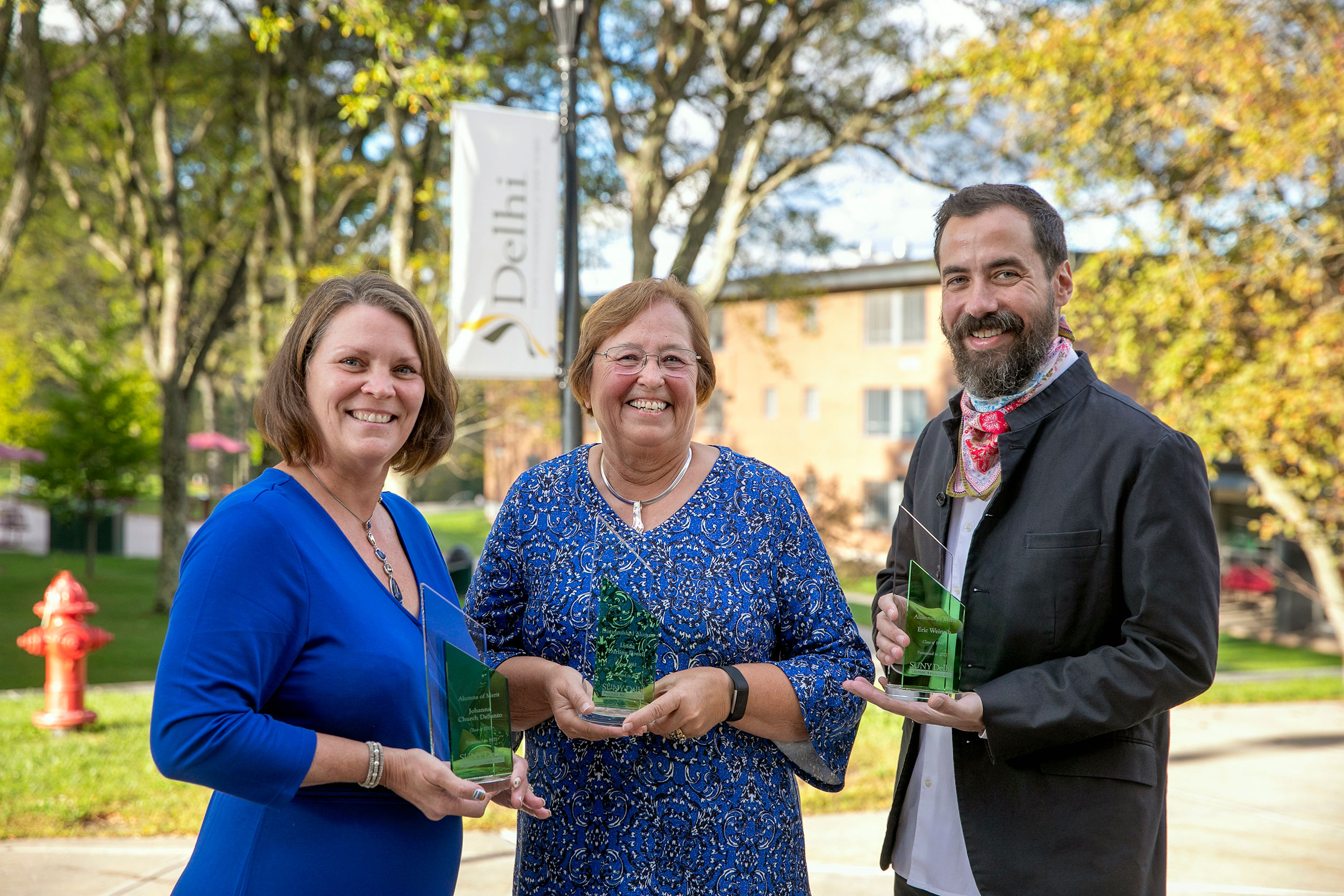